The elegant Sakura Fortune online slot from Quickspin was released in 2017 and immediately won the love of gamblers around the world. The developers managed to express the beauty of sakura and fill the slot with original features that attracted the attention of players to it.

The main symbol of the game was a beautiful princess. But the appearance turns out to be deceptive — a girl with a katana in her hands resists the intrigue of the imperial family and proves the truthfulness of the statement that luck loves the brave. 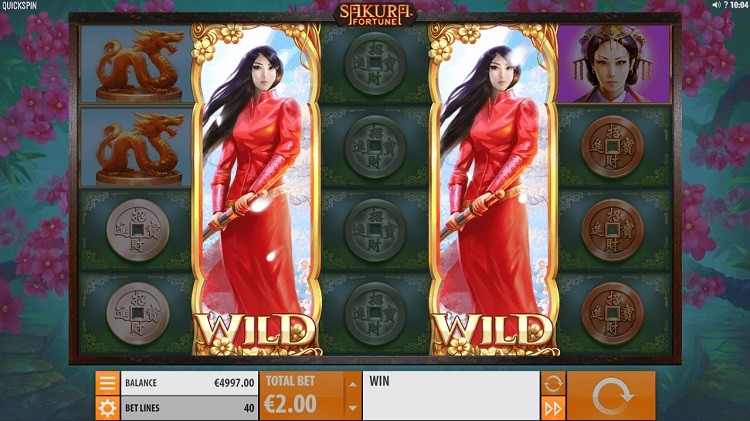 The machine uses 5 reels, 4 rows of symbols and 40 fixed paylines. The main advantage of the slot for experienced gamblers is considered to be high volatility: prize combinations do not fall out so often, but they allow you to win significant amounts.

You can launch the Sakura Fortune slot machine even with a limited budget — the minimum bet of 0.2 credits can turn into a decent payout. The RTP indicator at the level of 96.58% is also pleasing.
The use of a folded symbol, a sticky wild and a boost function is the main feature of the slot. As these game elements were combined by the developers from QuickSpin, the prize option is practically not used in other devices.

Images of Chinese coins — bronze, copper, silver and gold – are used as low-paying symbols. The highly paid ones include a jade lion figurine, a statuette with a dragon and three portraits of members of the imperial family – the emperor himself, his son and daughter. Combinations of three or more identical symbols in a line are paid in one direction from the leftmost reel.

The main character of the slot — the Oriental princess – is represented on a folded symbol, which can occupy the entire height of the reel. This sign simultaneously performs the function of wild and scatter. The picture appears only on the second, third and fourth reels.

If two or three stacked symbols at least partially cover the reels, the boost function is triggered — one or more wilds may appear on the playing field at full height. If, after spinning on two reels, there is a full-length image of the princess, these symbols become sticky, and the player receives two respins. The loss of the third wild prolongs the series of repeated spins.

The payments are indicated in the currency of the online casino with a total spin cost of 1 credit in the currency of the online casino.
The maximum coefficient when recalculating the total cost of rotation for linear bets is only x400 for 5 portraits of the old emperor in a line. The rather modest size of the maximum payout is explained by the features of the free spins round.

In addition to a special folded symbol, the game uses a second scatter in the form of a fan with a lotus image and the inscription Bonus. It appears on all reels and is responsible for triggering 7 free spins if at least three bonus symbols appear on the adjacent reels, starting from the leftmost one.

A combo of bonus symbols and stacked wilds that completely cover the reels can also be responsible for activating free spins — the total number of scatters of any kind must be at least three. For this reason, the transition to a series of free spins in most cases occurs after using respins.
For each additional folded sign during free spins, 1 free spin is given. The close connection between repeated and free spins with additional respins and free spins makes the Sakura Fortune casino slot machine attractive to beginners and experienced gamblers.

The features of Quickspin video slots are that there are no settings for line bets — the player can set the total cost of a spin in the Total Bet field in the range from 0.2 to 100 credits in the currency of the online casino. To start the reels, use the large button on the right side of the panel. In automatic mode, you can run from 10 to 1000 scrolls.

You can get acquainted with the management and basic functions of slots in the demo version. Its presence allows you to play Sakura Fortune slot machine for free and without registration. In the trial version, all functions are available except for the player’s achievements in the form of bonus options, which can be activated by an online casino operator to attract increased attention from customers to the game. This feature allows you to play additional free spins during the time spent in the game, collecting a certain number of combos, special symbols, etc.

Immediately after the release, the slot attracted the attention of gamblers and is still included in the list of the best Quickspin slot machines in online casinos. The main advantage of the game is a set of related bonus features.