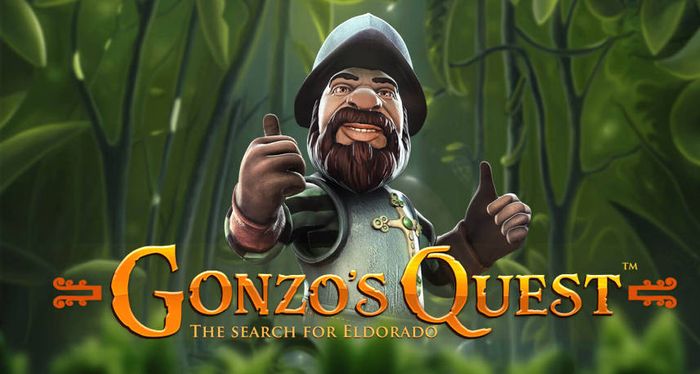 NetEnt’s Gonzo’s Quest online slot appeared in 2012 and instantly became a hit in online casinos, thanks to the original Avalanche feature. In fact, these are respins that are launched after any prize chain is compiled. The winning symbols disappear from the reels, and others fall in their place. As a result, you can get several additional spins with increasing multipliers for one bet. 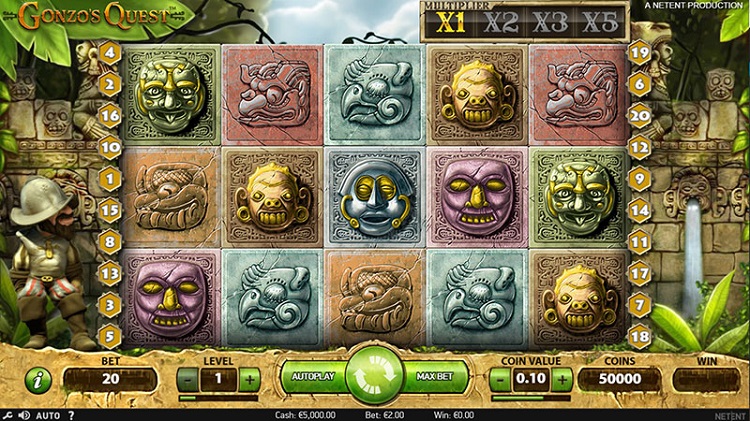 The main character of the game – colorful Gonzo – has a real prototype. This is the Spanish conquistador Gonzalo Pizarro, who in 1540, along with other adventurers, went in search of the mythical country of El Dorado. Europeans have not found the Golden City on the American continent, but the story is different in the video slot.

The slot has five reels and three rows of symbols. Winning combinations are lined up from left to right on 20 fixed lines. Chains of three or more icons are paid for.

The player chooses the coin value in the range from 0.01 to 0.5 credits. You can bet from one to five coins on each line, so the minimum cost of a spin is only 0.2 credits, and the maximum reaches 50 units in the casino currency.

The slot is not designed to be played offline, and it cannot be downloaded, but the game is optimized to all types of devices, so it runs in full-screen mode on computers, smartphones and tablets.
High-quality graphics and 3D animation are another distinctive feature of the slot. Thanks to them, the game released in the early 2010s still looks fresh and modern.

Gonzo gets to the foot of the golden pyramid of the Incas. The way to it is blocked by a portal with stone and metal plates — this is the playing field. The character himself is constantly on the screen to the left of the reels. He watches the blocks fall and welcomes each winning combination with cheers. The gameplay is accompanied by interesting sound effects: ethnic Indian music, the sound of stones, the noise of a waterfall and the singing of birds.
On the slabs that block the passage to El Dorado, the idols of the Incas are depicted — these are the standard symbols of the apparatus. The images of the deities are painted in different colors, the most valuable values are golden elements.

The payouts are made based on the linear bet and the coefficient of the winning combination. Relatively low payout coefficients increase several times when composing combos and activating respins-additional multipliers: x2, x3 and x5. Only a consistent series of effective respins is paid taking into account multipliers, and this is the main secrets of the steady popularity of the slot among gamblers.

Wild is a pictogram with a question mark that complements the combinations of all standard symbols. A scatter in the form of a golden plate is used to launch a series of bonus spins. At the same time, combos of wilds and scatters are not paid in any way.

The prize round starts if three scatters appear on the reels. The signs must line up on the active line — this is a prerequisite for the activation of frisins. After that, the stone blocks move apart and Gonzo goes straight to the golden pyramid. The main character finds himself in the mythical city of El Dorado.

The bonus game consists of 10 free spins, during which the avalanche function is still used with the launch of respins when composing combos. But higher multipliers are applied to payouts than in a regular game.

The first successful combo is paid with a multiplier of x3, the second – x6, the third – x9, and the fourth and subsequent – x15. If three more scatters fall out during the game, the series of free spins will repeat. The frequency of launching the bonus round is once per 100-150 spins.

The amount of the bet is changed using the buttons on the control panel. Using separate keys, you can adjust the value of coins (Coin Value) and their number per line (Level). The Max Bet button increases the number of coins per line to the maximum value, while leaving the same denomination. The cost of a spin in online casino credits is displayed on the bottom panel in black.
In automatic mode, you can start from 10 to 1000 spins with additional settings. By clicking on the wrench icon in the lower left corner of the playing field, you can activate the launch of the reels by pressing the spacebar on the keyboard.

The slot became the first device with the function of cascading spins and is already considered a real classic of NetEnt.

Despite the appearance of clones from other developers, the Gonzo’s Quest slot machine in the casino is still at the top of the rating, because it allows you to win large sums due to increasing multipliers during the use of respins.